Why Being A Well-Rounded Student Isn’t Enough Anymore

Why Being A Well-Rounded Student Isn’t Enough Anymore 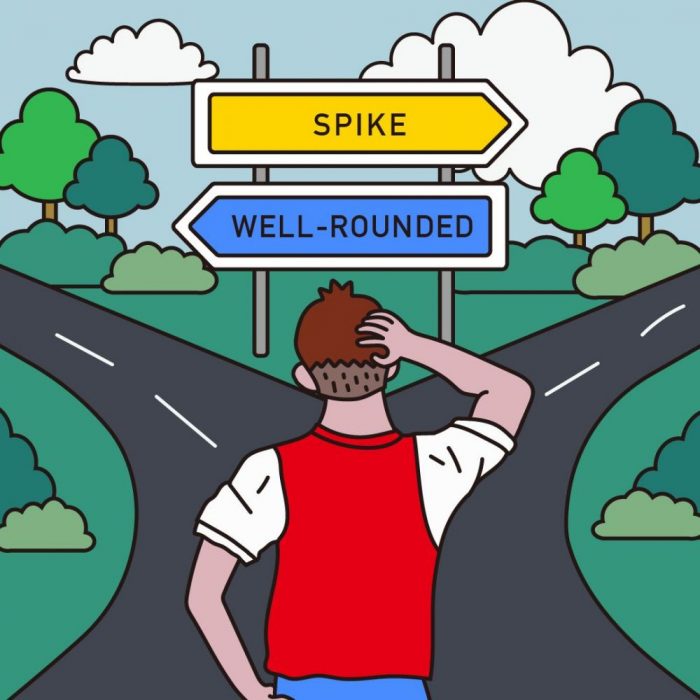 This year, college admissions was a tough game, especially for well-rounded students. The increase in applications to top-tier schools—sparked in part by the lifting of testing requirements—led to a significant decrease in the percentage of admitted students. Harvard admitted a mere 3.4 percent of applicants, Yale a paltry 4.6 percent, and Princeton a measly 3.98 percent. Other elite colleges had similar stats. Even high achieving, well-rounded students with stellar academic records and extracurriculars didn’t get admissions offers at their desired Ivies and other top schools.

The trend reveals a harsh truth: When admissions counselors are comparing well-rounded students with equally stunning transcripts, equally impressive resumes, and equally articulate, well-crafted essays, they need to look to other criteria in considering what makes prospective students stand out. And in a crowded field of applicants with similarly compelling achievements and academic records, a Spike is like catnip for admissions committees.

The Growing Competitiveness of College Admissions

The value, and indeed the imperative of the Spike doesn’t come out of thin air. It reflects an ongoing evolution in the criteria and rigor of college admissions. Once upon a time, students could get into a school like Harvard with nothing more than an understanding of classical languages. (To be fully transparent, the standards of the time also required that students were white, male, and financially well-off.) Nowadays, of course, the college admissions criteria are more comprehensive academically, more inclusive, and less esoteric. These changes occurred over time: as the number and quality of applicants increased, admissions considerations changed in tandem.

In an earlier era of college admissions, schools accepted everyone who applied. In the 1920s, colleges instituted what is now commonly known as “selective admissions,” a fancy-sounding term that essentially means not everyone who applied was accepted. Over the decades, schools became increasingly selective, admitting a smaller and smaller percentage of applicants, even as the population of student hopefuls grew. Certain schools, of course, were known as being more selective than others.

Reflecting on this trend as evidenced in recent decades, college counselor and former admissions officer Jim Jump considers the altered landscape for highly selective schools the ones that accept less than one-third of applicants—in a piece for Inside Higher Ed.

Jump’s summary of the trend provides helpful perspective not only for rising seniors but for the parents of seniors in the upcoming admissions cycle. Colleges nowadays are much more selective than when parents were applying to schools in their teens. The strategy of being a generally well-rounded student that worked for them often no longer makes the cut (see more on the well-rounded student below).

Go Beyond Being A Well-Rounded Student

So how do today’s high school seniors successfully hurdle the barriers to admission at selective schools? And do so while remaining authentic to their identities and aspirations as individuals? In the modern college admissions context, those who separate themselves from the pack of well-rounded students are those high schoolers who’ve shown their accomplishment and self-starting ethos with a Spike.

Education writer Jeff Selingo alludes to the value of that “extra something” in his book Who Gets In and Why, writing, “After a while many of the other numbers and key identifiers that accompany the applications begin to look the same. Everyone wants to major in biology, psychology, or business. They all scored a 1390 on the SAT and have a 3.7 [rebalanced] GPA… So again, the readers look for something that’s different.”

That’s why we at The Spike Lab are devoted to guiding high schoolers to go beyond being a well-rounded student. Our students complete projects that capture their passion and spotlight their creative, scientific, altruistic, social, or entrepreneurial wherewithal. We feel these projects are one of the best ways for students to stand out and show colleges the qualities that they want in their undergrads: smarts, practicality, grit, maturity, focus, determination, follow-through, organization, leadership. Our stats this year prove the value of our innovative “Spikey” approach over that of the well-rounded student in college admissions. Even in an unprecedented year of limited acceptances, 94% of our students received offers from at least one of their reach schools.

The Evolution of College Admissions

When we survey the history of college admissions, we see that as admissions have become more competitive, applicants have always needed to surmount an increasingly higher bar to differentiate themselves from other students. There have been milestone shifts in this process, like when colleges decided that well-rounded students needed to have studied Math to be admitted, or have a high school diploma, or take a standardized test, or yield to other measures of an applicant’s knowledge and potential.

For higher education history buffs, this Insider article, this detailed chapter by higher ed historian John Thelin, and this timeline overview by Dr. Yvonne Romero da Silva, EdD, for the NACAC, provide informative highlights of college admissions history that can serve as jumping off points for further exploration. From the collage of these portraits, we can sift out a few archetypal student profiles that reflect the increasingly elevated watermarks for student achievement:

Academics: An Afterthought (Or: White, Male, Wealthy, and Well-Connected)

After its founding in 1636, Harvard’s main admissions considerations were that applicants knew classical languages and were white men. (For more on the black experience at Harvard, read this piece and this overview; for more on women at Harvard check out this essay). The implicit rule was that you were also from an upper class, well-to-do family. Once prep schools were established, elite colleges built their classes from students at “feeder” schools for the well-to-do, like Phillips Exeter Academy (founded 1781) and Andover (founded 1778). Colleges tended to be affiliated with religious denominations, and applicants self-selected to find their match. Over time, college admissions standards became more stringent. In the 1800s, schools reviewed courses that prospective students had studied and even subjected them to exams.

In the early 20th century, standardized tests became an educational norm and something of a cultural fad, riding the wave of enthusiasm of measuring “intelligence” sparked by the introduction of the Stanford-Binet Intelligence Scale in 1916. Colleges throughout the US embraced the numbers tsunami, using standardized tests to evaluate potential students; in the 1920s and 30s, elite colleges began to be more open in accepting students from non-feeder schools who placed well on standardized tests, giving students incentives to catch the eyes of admissions through stellar scores. Even while critics have lambasted standardized tests for being unfair, biased, and not an accurate predictor of success in college academics, colleges then and now have used them to “take the measure” of students, and test scores have become benchmarks that students seek to meet, or top.

The history of post-World War II higher ed is one of a growing pool of qualified applicants, resulting from a combination of legislation, government policy, breakthrough legal precedents, admissions incentives, and financial assistance programs, ranging from the GI Bill to Pell Grants and diversity initiatives. As competition for spots at top schools became more fierce, colleges began to look at a more “holistic” portrait of prospects that took into consideration a student’s character, challenges, and distinctive abilities. In this way, colleges gained a more nuanced understanding of applicants and the qualities they would bring to the school community and academics.

In the 1980s and 1990s, high schoolers who fit the well-rounded student profile emerged into the admissions taxonomy as the ideal prospects. To prove that they fit into the category, high schoolers began participating in a comprehensive range of extracurriculars—with the requisite investment from families—to show up more distinctly in the eyes of admissions officers. Simultaneously, these well-rounded students also began applying to multiple colleges to improve their chances at admittance.

With the well-rounded student phase over (some call it “well-lopsided”), the Era of the Spike has begun. Considering the perpetual magnification of scrutiny that college admissions officers direct towards students, the Spike is essential to successfully navigate the gauntlet of elite school admissions, because the competition for the coveted spots at top-ranked colleges has only grown more ferocious, as demonstrated in this year’s skyrocketing admissions numbers. Indeed, ever since the 1990s, the qualified applicant pool has grown in parallel with the growing US population, larger numbers of international applicants, the widespread adoption of a hyper achieving mentality, and heightened emphasis on diversity. Additionally, as the cost of higher ed has ballooned, families feel they get the most value from a smaller subset of top colleges.

In college admissions circa 2021, we are past the point where the well-rounded student is the ideal applicant. The Spike is both inevitable and valuable. So as you begin your college search, the question you must answer is: What’s yours?

Is your college admissions profile too much like that of the typical well-rounded student? Talk to us to learn more about how our expert entrepreneurship coaches can help you develop your Spike.

The 12 Best Productivity Apps for Students