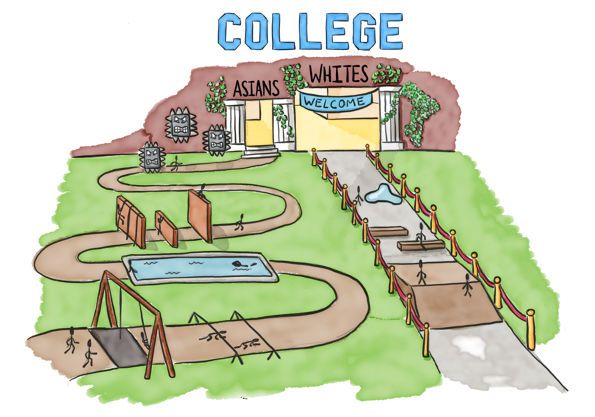 According to research from Princeton University, students who identify as Asian must score, on average, 140 points higher on the SAT (out of 1600) than white students to have the same chance of admission to private colleges. They must score 450 points higher on the SAT than black students. This is the “Asian Tax” that some refer to. More specifically, it’s how Asian American students have been affected by affirmative action policies in college admissions. The fact that Asian students have to do better academically than others to get admitted into selective US colleges may not come as a big surprise.

What about the legal implications of how affirmative action affects Asian Americans? This issue has been a particularly hot debate due to the Students for Fair Admissions (SFFA) v. Harvard case. In 2019, the Massachusetts federal district court ruled in favor of Harvard. Since then, SSFA has filed an appeal and petitioned the Supreme Court to hear the appeal, which may not happen until early 2022. See the article links below to learn more about this case.

The legal context of affirmative action

The US Supreme Court has held in the past that explicit race-based biases in college admissions are unconstitutional. But colleges have historically been able to work around the Court’s rulings by avoiding explicit race-based quotas. They also argue that their admissions committees evaluate applicants holistically. This means admissions officers take into consideration a range of both academic and more intangible non-academic factors, such as personality. The colleges’ argument, in essence, states: “Asians are, on average, academically high-achieving, but are also, on average, lower-achieving non-academically, and this accounts for the discrepancy in studies that focus too much on standardized test scores.”

Many elite US colleges argue that to maintain a rich-learning environment, they need to ensure a diverse student body. That includes, in part, racial diversity. They argue that they make an effort to achieve this racial diversity in admissions based on “race-neutral” factors like income. However, they cannot be completely blind to race to achieve a healthy level of racial diversity. This argument was supported by the US Supreme Court’s recent June 2013 ruling on this issue, Fisher v. The University of Texas at Austin. In Fisher, the Court held that universities’ admissions decisions need not be blind to race if the university can “convincingly prove that no workable race-neutral alternatives produce the educational benefits of diversity” consistent with the University’s educational mission.

At the Spike Lab, we work with many students who are Asian American or hail from Asian countries, like Taiwan. This affirmative action debate directly impacts our students for two reasons. First, our students and their coaches, need to be aware of the reality of their situation. When our students and coaches are building college lists, they need to scrutinize the admissions statistics of different colleges. This includes average ACT & SAT scores. Our students of Asian descent must adjust these population-wide statistics to reflect the numbers for Asian and International applicants. Second, we all need to advocate on behalf of the Asian community to reform what appears to be a discriminatory system.

We won’t bore you with the details of our perspective on this complex debate. In short, we understand the argument in favor of racial diversity on college campuses. We also support the argument that colleges need some type of affirmative action to achieve a certain level of diversity.

However, we believe that the extent to which admissions preferences currently disadvantage Asians is not acceptable, especially given the strong evidence that they disadvantage white applicants much less than they do Asians. Let’s assume for the sake of argument that Asian applicants are less non-academically competitive on average than white applicants. Then, any difference in “non-academic achievement” appears to be disproportionate to the discrepancy seen in the admissions numbers. As recently as 60 years ago elite US college admissions severely discriminated against American Jews, and this history of discrimination is repeating itself today with Asian Americans. This state of affairs is not acceptable.

What Asian students can do

Despite the lengthy discussion above, it will take significant time to resolve the legal issues at hand. In the meantime, it is imperative for Asian students to acknowledge how the system currently works and respond accordingly.

If you are Asian and applying to top US colleges, here’s what you should take away:

To learn more about what we mean by non-academically high-achieving, check out our blog post on which clubs are best to join and not join. We also recommend another blog post that explains the difference between a Spike and good extracurriculars.

Additionally, college consultants nowadays may recommend that students of Asian descent develop an interest unique to their pool of applicants. These may include musical theater, creative writing, the humanities, non-racket sports, etc. Unless the student is genuinely interested in this activity, we don’t recommend this approach. High school students already have precious limited time to develop their interests. Admissions officers (and we) also believe that students shouldn’t change themselves for any particular college. Instead, you should develop a profile so interesting that colleges can’t turn you away!

How We Can Help

Our Spike Coaching program is designed to help students address the latter insight. We support students’ efforts to develop an impressive non-academic candidacy profile. Five years ago, we began with focusing on international students in East Asia because that is where the need is the most pronounced. In East Asian countries, university admissions are almost completely based on academics (i.e. entrance exams). There, students have to work against a strong cultural norm to focus primarily on non-academic achievement. We also recognize that many students whose families have immigrated from these countries may face the same cultural pressures to succeed academically.

Since our founding, Spike Lab has expanded to the US and other countries in order to help more students develop personally and entrepreneurially. Our innovative approach to college admissions has been extremely successful. Historically, 100% of TSL students have been accepted into the top 50 universities, and 92% of students have been accepted to their reach colleges. You can find our extensive college results here.

Lastly consider the following articles, papers and books to delve deeper into this debate on your own:

The Front, Side and Back Doors into Elite US Colleges

Teaching Kids Gratitude (Why It Leads to Success)